The following quote is from a story in the Georgetown Times about a middle school science fair:

Brian Benson, an eighth-grade student who won first place in the Life Science/Biology category for his project "Creation Wins!!!," says he disproved part of the theory of evolution. Using a rolled-up paper towel suspended between two glasses of water with Epsom Salts, the paper towel formed stalactites. He states that the theory that they take millions of years to develop is incorrect.

There are so many things wrong with this, I don't know where to start. For one thing, when people talk about stalactites they are talking about things formed mainly of calcium carbonate, which is very different from epsom salts (though some epsomite stalactites do exist). Even if some artificial conditions can create something analogous to one form of stalactites, it does not say anything about others - about the ones people are referring to when they say stalactites grow at about .1 - 10 centimeters per thousand years. We can use artificial selection to breed a taller or fatter animal in much quicker time than it might show up in nature, but that doesn't disprove that such slow, natural changes happen.

More importantly, though, his experiment has nothing to do with evolution or life sciences. It addresses geology (at a middle school level, obviously, and no fault to the kid for this fact). Our understanding of evolution does suggest that large-scale changes like speciation often involve (not necessarily require) millions of years or more. So if the kid had proven that the Earth hasn't been around millions of years, he would indeed have thrown into question our current understanding of some details of evolution. But he wouldn't have demonstrated a young Earth even if he had in fact shown that stalactites can grow in less than a million years.

First off, just because you show something can happen in less than a million years doesn't mean it always happens that fast, so it can't disprove old stalactites. Furthermore, even if all stalactites grow in less than a million years, it only shows that they don't require such long time periods. It doesn't say anything about life, evolutionary changes, speciation, or the age of the Earth or universe in general. His experiment not only didn't do what he claimed (disprove evolution), but it couldn't have answered the question even if it was designed much better.

Don't Blame the Kid
Now, I can't really blame the kid. He goes to a Christian school which probably explicitly teaches students anti-evolution materials. He can only work with the information he's been given. What is bothersome about this story is not that the kid did this experiment or claimed the results he did, but that he won the competition! The adults in charge, presumably those most well-versed in science, ignored the huge flaws in basic reasoning here and rewarded the kid for passing off shitty pseudo-science as good science.

So What?
Okay, so it's just a middle school science fair in a Christian school. The kids come away with a broken understanding of science. That's too bad - it potentially puts them behind their peers in the real world - but what's the big deal really? It doesn't hurt anyone but those kids, right? 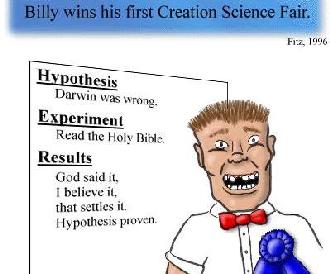 Wrong. As this article on Patrick Henry College brings to light, kids like this, who are being groomed by adults into little truth-twisting rhetoricians, can grow up to become real movers and shakers in law and government. They end up influencing policy (including science policy and funding) at the national level.

Patrick Henry is trying a complicated experiment: taking young evangelicals who have been raised in rarefied, controlled atmospheres and training them to become political leaders without somehow being corrupted by the secular world's demands-or, for that matter, moving to the middle.
[...]
Of the school's sixty-one graduates through the class of 2004, two have jobs in the White House; six are on the staffs of conservative members of Congress; eight are in federal agencies; and one helps Senator Rick Santorum, of Pennsylvania, and his wife, Karen, homeschool their six children. Two are at the F.B.I., and another worked for the Coalition Provisional Authority, in Iraq.

We should worry about things like Brian Benson's middle school science fair project because it the start of a process that can eventually affect legitimate science in very negative ways. It is an explicit attack on science by pseudoscience and we must be vigilant to try to correct the misinformation that these children are fed. We need to work to get these kids scientific information before they grow up and become too entrenched in their worldview to question the lies they've been taught since childhood.
Originally Written: 07-29-07
Last Updated: 07-29-07