I've been thinking a lot about the Monkeysphere recently. An article called Inside the Monkeysphere by David Wong coined the term to describe the numerically limited group of individuals in our lives whom we can really think of as individuals rather than a nebulous part of the masses. He riffs off of primatologist Robin Dunbar's "Social Brain Hypothesis", which basically says that the size of a primate's brain is correlated with (and might predict) the size of their social groups. Bigger brains are needed to keep track of bigger social groups with more complex relationship dynamics, though whether the larger groups drove primate brain evolution or brain evolution drove primates to larger groups would still be up in the air. Regardless, it's an interesting (though still controversial) hypothesis.

Wong's article asks the reader to imagine one or a handful of monkeys, each with distinct names and personalities. That's easy for me. I work with a small group of really cool capuchin monkeys. This is Leo. 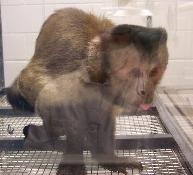 Leo is really gentle, laid back, friendly and a big flirt with the ladies (well, okay, and with us guys). He is really expressive, makes 'kissy faces', loves raisins, and he's pretty smart (he rocks at some simple computer games). If he were to die in a fight with another monkey, I'd be incredibly sad. The same goes for the other seven monkeys I work with on a regular basis. Xavier is timid and shy, and maybe not the smartest monkey in the barrel. Chris is genuinely neurotic - he loudly pounds objects and screams for attention, sticking his tail out for petting, but anytime someone comes near, he jumps back scared. And so on for the rest. They each have names and personalities and I have memories of times I've spent with them.

Wong, however, asks the reader to next imagine a hundred monkeys, or a thousand. In my mind, the monkeys cease to hold unique personalities and traits; they become "a faceless sea of monkey" as he puts it. Basically, the human mind can't keep track of all those individuals as individuals. We know on some intellectual level that each of those monkeys - and each of the humans on Earth - has a unique story and life behind them, but in practice our brain can't hold enough information (even if it were available) to keep track of all that.

So our brain, being the efficient machine that it is, automatically groups large associations of individual items of a certain type into a single item. We can then think about that item and its properties in nice, general terms, ignoring the flood of information (or hypothetical information) that makes up the details of each individual component. This is very handy for keeping track of events at a larger scale than one's own backyard, but it has obvious drawbacks. This is where stereotypes come from, and even those based heavily on fact come at a certain price of lost accuracy.

But more importantly, I think, is the implication that if our empathy is only turned on when thinking about and dealing with individuals, with well fleshed-out characters, then those outside of our limited Monkeysphere (exceeding Robin Dunbar's magic number of 150 individuals that the human brain is built to deal with) are just a big mass of who-cares.

Granted, when we hierarchically group individuals into a single unit, we can have units at a closer or farther level from the individuals we deal with as individuals. My city or my country are conglomerates we may attach more value/empathy to than far away groups (another country or all humans). And the values here do not necessarily come from an inability to apply empathy to those we can't imagine as individuals. There are plenty of other variables at work (e.g., bias toward valuing familiar culture over something different); but the point is, if we could imagine out the individual lives of all the people involved in the conglomerated mental groups we deal with on a daily basis (say, Iraq), then empathy would kick in for those people and we would handle things differently. We wouldn't be so uncaring about the deaths of tens of thousands of people.

But we can't. We just can't picture that many monkeys or people as anything but a blob. We do recognize all those individuals as individual on a purely intellectual level (well, okay, not everyone does - to some bigots a 'raghead' is a 'raghead' is a 'raghead'), but we do not feel the same empathetic pull at their deaths. At most, we feel a weak sort of generalized guilt or sadness at the abstract knowledge of so many lives extinguished.

I think the big lesson in this is that even though we can't yet do much to get around our innate hardware limitations (the limited size of our own Monkeysphere), we can at least try to reprogram our software to mitigate the effects of this limitation and get around its side-effects. We need to practice recognizing and deconstructing hierarchies where our cognitive heuristics have lumped items automatically, and force ourselves now and then to really see some of the individuals within those groups.

We certainly have the ability to do this. We dynamically add new items to our Monkeysphere whenever we read a good character-driven book or watch a dramatic movie. We see details and personality traits for a character and we follow the story for a while and begin to build an attachment, to build empathy. By the end, we kind of really care what happens to this individual, even though we are just dealing with a fictional character. Then a while later, after leaving the book or movie, the character fades out of our Monkeysphere.

If our Monkeysphere is this dynamic and programmable, then we should be able to temporarily add new individuals from basically any lumped group of people. Even those from different cultures, even our enemies in war, even those in history. We still have to deal with all our other psychological biases, but I suspect it is necessary (not sufficient) to occasionally pick out individuals from any cognitively-grouped set of people in order to invoke the empathy necessary to treat that group decently (that is, to avoid the short-circuit that lets us kill innocent "others" or "them" without regret).

At some point in history, it was no doubt beneficial and even necessary for survival to care only about one's own Monkeysphere. Even with these small, often-overlapping groups pushing up against each other's self interest, a larger emergent and semi-stable culture developed. But I suspect that in today's fast and wide-scale global interactions (which will no doubt only multiply in the future), sticking to the Monkeysphere-oriented competing goals will only lead to further instability. Perhaps we can improve that situation by doing what we can to adapt or get around our evolutionary programming with tricks like actively seeking out or imagining individuals from among "the masses".