Bonobos are highly fascinating apes that have only been recognized as a species since 1933. They are becoming well-known nowadays for their pan-sexual promiscuity and peaceful reputation, making them an easy cause to rally around, since they're also seriously endangered. 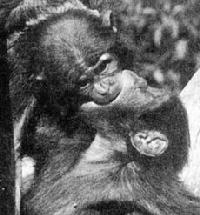 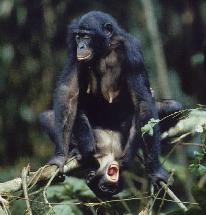 Additionally, they are thought to be extremely intelligent. One of the most famous of the handful of language-trained apes is a bonobo, Kanzi, who as a youth picked up a lexigram system without any formal training, just by observing the experimenters' failed attempts to train his mother. My own research has involved collaborating with the facility where Kanzi began (as well as a number of language-trained chimps), and his reputation has brought a lot of acclaim on a species that is otherwise easily missed. Before being recognized as a distinct species, for quite a while bonobos were mistaken for chimpanzees. Today their numbers are dwindling dangerously low, since their one and only habitat is in the middle of an African civil war zone (the Congo); it's no wonder that few researchers have even seen wild bonobos, and that much of the research we know comes from captive studies.

In July, 2007 the New Yorker ran a piece on bonobos, entitled Swingers. It's a very entertaining and generally informative read, but of significant length. It follows the field study hijinks of Gottfrief Hohmann, work which actually turns out to be pretty monotonous. In the three weeks the reporter joined him in the field, they only saw bonobos twice, and for a brief time. Field studies with these creatures take years of dedicated work in a harsh environment for very little payoff. But in the end such work is necessary to really understand these creatures.

Hohmann aims to debunk some of the more exaggerated claims about bonobo behavior: that they live a tranquil life of free-love, for example. In fact, bonobos hunt in the wild (including smaller monkeys). They fight - though perhaps less frequently than chimps (who have been reported to hold extended war-like conflicts between groups). In the wild, they do not seem to engage in sex as ubiquitously as previously assumed.

A lot of what we know about bonobos comes from studying captives: it's just been too hard to get to the bonobo habitat, and takes so long to gather significant information about them (their habitat and/or demeanor makes them harder to track than chimps). Heavily published researchers like Frans de Waal have shaped the public impression of these creatures - and de Waal has himself never seen a wild bonobo (though do not make the mistake of discounting his vast experience with bonobos and other primates; he knows his stuff). So our view of them has been biased by the differences that necessarily come out in a species housed in a human-constructed environment.

Thus Hohmann's skepticism about bonobo peace and love is refreshing - we should always be on guard against too easily accepting what we want to hear, and humans no doubt want to hear their close evolutionary ancestor manages a peaceful existence (giving us, perhaps, a similar hope). However, it sounds like other researchers in the area - including field researchers with bonobos - have some issues with how Hohmann does his work, so it may just turn out the truth is somewhere in the middle.

The research on sexual behavior is particularly controversial. Bonobos have been seen to engage in all sorts of sexual acts in all sorts of pairs: male-female, male-male, female-female, involving young and old alike, oral and genital and manual contact, and have even used toys sexually in captivity. They are known to diffuse tension, avoid conflict and repair relations by initiating sex. They open-mouth kiss, and have face-to-face sex. All in all, a very human-like species, sexually.

But remember, a lot of this comes from captive studies. The New Yorker article cites a contrary finding by Craig Stanford: female bonobos don't actually mate more frequently or less cyclically than chimps, and in the wild male chimps copulate more often than male bonobos. So maybe the captive studies mislead us?

However, Stanford's findings only looked at heterosexual sex. They completely ignored sexual behavior between those of the same sex. A field researcher like Hohmann may want us to believe that wild bonobos are much less sexual the captives we've previously observed from, but he also wants us to believe that extended genital-genital rubbing between two females is a completely non-sexual activity.

That just stretches my credulity. That is almost like saying of humans that intercourse with birth control is not sexual behavior because it cannot lead to a baby. (Others have had similar comments.) This demonstrates where there is another hidden issue behind the (admittedly important) captive-wild distinction: researchers come at this from their own preconceived background philosophy and frame their research questions (and data) under these schema in ways that can manipulate our impression of the reality when we just read the results.

Certainly it is likely that bonobos will turn out more mundane and mixed than the idyllic representation they initially received. But at the same time, we must take care not to ignore their genuine species differences (especially when many of those things do still show up in the wild), even if that means some researchers must reexamine their ideas of what it means for animals to have sex.

Meanwhile, we need to keep the bonobos alive long enough for field studies to actually learn about their wild behavior before it is too late and their mysteries are lost to us forever.