The Life of Abbie Hoffman

I just finished reading The Autobiography of Abbie Hoffman (published 1980). This activist, revolutionary, brilliant guy embodied the heart of the 60s, and indeed embodies the heart of all activists fighting against a corrupt, messed-up system.

Abbie Hoffman was a smart kid born in 1936 to an Ashkenazi Jewish family that was assimilating into a somewhat anti-semitic America right before World War II broke out. Kicked out of high-school, he was a trouble-maker and a hustler early on. His parents managed to get him into a fancy academy to finish high school, which brought him to college at Brandeis.

There he ran into some big name teachers, like Abraham Maslow for psychology, Herbert Marcuse for political philosophy, Leonard Bernstein for music, Eleanor Roosevelt for foreign affairs. He ended up getting his masters in psychology, coming out of Berkeley right at the birth of the 60’s. He saw Castro speak. The CIA had just been born and was already pulling dirty tricks abroad. Students were demonstrating. Allen Ginsberg was composing poems right across the bay (they later would become friends).

In 1960, a couple events shaped Abbie from a college student into an activist. First, Abbie attended a silent vigel for a man who was to be put to death based on circumstantial evidence after a 12-year legal battle.

The only person who could spare his life–Edmund “Pat” Brown–sat in the governor’s mansion and issues a statement: “Although I personally am opposed to capital punishment, the laws of the state of California must be obeyed. My hands are tied.” […] The warden came out and served coffee and doughnuts. He made a short speech through a megaphone explaining that he, too, was opposed to capital punishment […] how everyone had done all they could to save his life. […] Around me people were in tears. Someone moaned, ‘No! No!’ as if he had been wounded. No one shouted. No one threw a rock. Dazed, we piled into cars and headed back to Berkeley in silence. “How does that work?” someone asked of no one in particular. “In a democracy, I mean, no one wants to see him die and the state kills him?” There was silence.

Soon after, the House Un-American Activities Committee (HUAC) came to town to investigate subversive activity in Berkeley. Students protested, and Abbie was among them when riot police came in with clubs and “knee-bender” hooks for breaking bones. Students were clubbed, thrown, and kicked. A pregnant woman was tossed down a flight of stairs. Abbie saw his first real police abuse.

Later that year, at the end of a film shown by the HUAC which claimed student protestors were communist agitators, Abbie stood up and questioned the propoganda. The performance led him to be recruited by the ACLU to tour with the film as the ACLU’s representative. At each showing of the film, he stood up during the Q-and-A period and fought to undercut the red-scare message in towns across the state. Thus began his community organizing efforts, as he fought to rouse opposition to the HUAC’s persecution and scare-mongering (and risked the threats of the local good ol’ boys, American Legion and others).

For a while after that, Abbie worked in the civil rights movement with the NAACP, facing the dangers of a community organizer in a small town, like threatening phone calls and dead animals on the doorstep. The group picketed stores with bigoted policies, set up landlords for discrimination suits, published a newspaper, set up daycare centers and held voter registration drives in the black community. Soon after, he traveled through the South working on the civil rights movement, and became a leader of The Student Nonviolent Coordinating Committee (SNCC):

The stories I learned in the South now seem like ancient history […] but this was the mid-1960s and they were real. As real as NO COLORED SERVED HERE signs and two drinking fountains, one a foot lower than the other. Wall, Mississippi had a barrel where a Negro was supposed to stick his head when he felt like laughing. Even in the state capital a black was to step aside on the sidewalk when a white wished to pass.

Local civil rights organizers were killed. The group held a march in Jackson where three thousand people were arrested. The Ku Klux Klan tracked and hunted organizers after getting fed their license-plates from police. Abbie took part in a few 100 mile-per-hour chases with gun-toting Klansters behind him. Klan members, local police, and FBI agents all gave their fair share of beatings to the SNCC when the group picketed racist businesses. Arrests were commonplace for Abbie during this period.

Not long after, Abbie ended up in New York’s Lower East Side, where he established Liberty House, a store sold goods from Mississippi co-ops to support the civil rights movement in the South.

In 1967, Abbie moved on from the civil rights movement to protesting the Vietnam War, organizing mass demonstrations, marches, rallies, guerrilla theater, and anything else to stop the war. He co-founded the Yippies (the Youth International Party), something like politically-active hippies, representing youth rebellion and radical 60s activism. 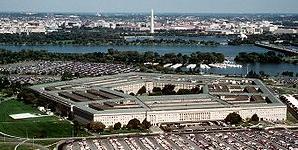 The Yippies got 50,000 people to march on the Pentagon in a mass demonstration against the war. They used theatrics to convince young people to become more active in politics — the crowd attempted to levitate the Pentagon with psychic energy. Another time, Abbie and some other Yippies snuck into the New York Stock Exchange and threw piles of dollars onto the floor from above, briefly interrupting the ticker as stock brokers scrambled frantically on the floor to grab up each dollar. The Yippies’ activities became media events, but Abbie is clear to point out:

I never performed for the media. I tried to reach people. It was not acting. It was not some media muppet show. That is a cynical interpretation of history. […] Guerrilla theater is probably the oldest form of political commentary. The ideas just keep getting recycled. Showering money on Wall Street brokers was the TV-age version of driving the money changers from the temple.

They dropped 10,000 flowers on New York from a plane. Held huge be-ins in the park. Lit up the sky with gigantic explosions of magnesium on the rooftops around St. Mark’s Place. Organized a flower brigade to walk in the right-wing Support Our Troops parade. Exploded soot bombs in the Con Edison utility company. Plastered “WAR” below “STOP” on stop-signs across New York. Snuck into subways at midnight to paint huge murals. Held 5,000-strong celebrations declaring the Vietnam War over (“If you don’t like the news, we reasoned, make up your own”).

On Valentine’s Day, Abbie mailed a care package out to 3,000 randomly selected people, in each one a joint and a card saying: “Happy Valentine’s Day. This cigarette contains no harmful cancer-causing ingredients. It is made from 100 percent pure marijuana.” (Jimi Hendrix funded the marijuana mailing.)

But theatrics aside, Abbie was a serious full-time organizer bringing together huge protests against the war. And those protests in turn brought together bands of police, riot cops and angry pro-war conservatives, who were not afraid to dish out harassment, beatings and even the occasional death to the anti-war crowd.

I respected [other organizers’] pacifist beliefs, but something in their approach jarred my American heartland upbringing. I practiced nonviolence as a tactic, but was far from a follower of Gandhi. Confrontation always demanded surprise and uncertainty. By saying “If you punch me in the face, I’ll turn the other cheek,” you could often get hurt more than if you kept a threat of returning the blows. While Gandhi was fasting in jail, guerrillas blew up trains throughout India. When Martin Luther King, Jr. prayed, blacks rioted, and armed groups formed in the ghettos. Violence and the threat of violence have a good track record when it comes to changing the minds of people in power.

While the Yippies came about as a political offshoot of the hippies, Abbie says “Personally, I always held my flower in a clenched fist. […] Troop levels in Vietnam had risen to 500,000 men. The apocalypse was upon us. We activists had to harness our manic energies. Sure, I believe in the power of love, but the time had come to make outrage contagious on a grand scale.” While the hippies were content to make love and smoke dope (which Abbie did plenty of!), Abbie had the itch to act, to get into the street and make things happen.

Abbie and other activists brought together a massive anti-Vietnam War protest in Chicago at the 1968 Democratic National Convention. The protest turned ugly, largely thanks to police harassment and brutality instigated at the behest of Mayor Daley (the ensuing violence was later declared a “police riot”). Regardless, Abbie and seven others were arrested and tried for conspiracy to incite a riot. One of the eight, Black Panther co-founder Bobby Seale, was given a separate trial, and the remaining organizers became known as the Chicago Seven.

Abbie and the other defendants ridiculed the judge, refused to dress up (Abbie and Jerry Rubin came in one day dressed in judicial robes), and generally fought the process tooth and nail. Five of them, including Abbie, were found guilty of crossing state lines with the intent to incite a riot, and numerous contempt charges. The appeals court later overturned the riot charges. 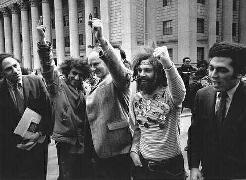 Abbie continued agitating against the war, and earned himself countless arrests, and plenty more beatings by police and vigilante right-wingers. He was pulled in front of the House Un-American Activities Committee, and showed up in a star-spangled red, white and blue shirt, which led to him being the first person arrested under a new federal flag-defacing statute. The conviction was later overturned.

In 1973, Abbie was arrested on charges of intent to distribute cocaine; he claims undercover police had entrapped him and planted evidence. Regardless, after some more time spent in jail, he skipped bail and went into hiding, living underground for much of the next decade, during which time he wrote his autobiography.

Even while underground, he couldn’t stop community organizing. He ended up coordinating an environmental campaign to save the Saint Lawrence River under one of his pseudonyms, Barry Freed. Eventually, in 1980, he turned himself in and served a year in jail; upon getting out, he remained an activist.

In 1986, he was arrested along with Jimmy Carter’s daughter and thirteen others at the University of Massachusetts protesting CIA recruitment on campus. In their defense, the defendants called witnesses to describe the CIA’s role in illegal, violent activities over the previous decades. They sought to put the government itself on trial. Acting as his own lawyer, he quoted Thomas Paine on civil disobedience:

The defendants were found not guilty, in essence finding the CIA guilty. Around this time, Abbie was in the media spotlight giving lectures about CIA covert actions. He made a cameo in Oliver Stone’s ‘Born on the Fourth of July’, an anti-Vietnam War movie. He wrote (he published a number of books during his life).

And in 1989, he died on an overdose of phenobarbital, officially ruled a suicide, though some close to him believed it accidental.

Since then, his life has been portrayed on film by Vincent D’Onofrio in ‘Steal This Movie’. He was a character in Forrest Gump. The Chicago trial has previously been the subject of an HBO movie, and is currently the subject of a new movie to be produced and directed by Steven Spielberg.

Abbie Hoffman is an inspiring guy. He represented the best of the love generation, but also fought his ass off for the ideals he believed in, and put his own freedom and life on the line against death threats, beatings, gunfire and way more arrests than most people have birthdays. Through it all, he never gave in, never abandoned his values, never bowed his head to judges and juries. And he never lost his theatric, ludic spirit.

3 Responses to The Life of Abbie Hoffman