You have ten times as many bacterial cells as human ones in your body, and that leaves out viruses and fungi. Are those non-human creatures in your body part of you?

It’s easy to think of them as ‘not you’, as little Others along for the ride on your body. They are parasites and symbiotes that feed off of us, help us digest food, might even protect us from infections – but they’re not part of me, right? 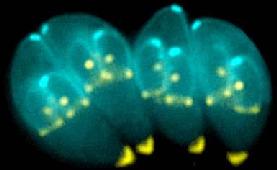 Enter Toxoplasma gondii, a protozoan parasite that infects all sorts of mammals but really loves getting into cats (the only place it can reproduce). In fact, its talent is finding its way from other mammals into cats. How does it do this?

By altering the behavior of intermediate non-cat hosts. If a mouse is infected, it starts hanging out in open areas. An infected rat actually seeks out cat urine, rather than running from it. Then, presumably, the mice and rats get eaten by hungry cats. In other words, T. gondii changes the behavior of its hosts in order to maximize the chance of finding its way inside a cat.

Of course, T. gondii doesn’t just find itself inside rats and mice on its way to cats. Often it gets into humans, through exposure to pet cats or from eating uncooked meat (a report in the UK discovered that up to 38% of stored meat was infected). Some infected people develop flu-like symptoms, but most people develop no symptoms and the infection remains latent and apparently inactive. For a long time, it was assumed that latent infection in humans had no real effect on the host.

However, more recent research suggests that T. gondii may affect human behavior and personality traits. As cited in this paper by Kevin Lafferty, infected women tend to be more intelligent, warm, outgoing, rule-conscious, dutiful and conforming. Infected men tend to be less intelligent, less rule-conscious and conforming, and less novelty-seeking. Both sexes tend to be more guilt-prone, self-doubting and insecure if infected.

Lafferty also shows a link between the rate of T. gondii infection in particular countries and the cultural prevalence of some personality traits in those countries. Specifically, countries with the highest rates of infection also show the highest rates of neuroticism in the population. In Western nations, masculine sex roles and uncertainty avoidance were higher in countries with higher rates of infection, which may have something to do with T. gondii’s effect on testosterone. Infected men are rated by women as more dominant and masculine than non-infected men.

(Note that T. gondii also appears to affect dopamine production and is related to schizophrenia incidence).

However, a previous study by Flegr and Hrdy that found personality differences between infected and non-infected also presented some evidence that T. gondii was causing personality changes rather than personality causing T. gondii infections. Specifically, the longer someone had been infected, the bigger the personality difference. This doesn’t prove that the parasite is altering personality – something that will be hard to test since we can’t ethically infect people and then watch for changes – but it makes the idea pretty plausible, especially since T. gondii definitely causes the behavioral changes in rodents.

Obviously T. gondii infection doesn’t account for your entire personality; the effect might be subtle. However, personality isn’t the only thing affected. As pointed out here, infected people show worse reaction times (i.e. respond slower). In fact, people with T. gondii are 2.65 times more likely than others to be involved in a traffic accident!

If this were a rare infection, it might not be a big deal, but infection is actually pretty common. In some countries (e.g. France, Germany and the Netherlands), roughly 4 out of 5 people are infected. In the U.S., about 11% of the population is infected. Worldwide estimates of infection range from 30% to 65%.

Which means there is a decent chance you are infected with T. gondii, and it may have helped shape your personality, who you are. It’s always disorienting to contemplate, but it is hard to deny fact that our personality – how we think and act and respond to situations – is to at least to some extent externally determined, by genes inherited from our parents, by past experiences growing up, and even by latent parasitic infections.

This entry was posted in Uncategorized and tagged conformity, identity, psychology. Bookmark the permalink.