My grandfather lived a long life, well into his eighties. In his later years, he was caught in the grip of full-blown Parkinson’s dementia, and doctors suspected Alzheimer’s disease. He didn’t recognize people he had known all his life. He generally couldn’t hold a conversation, not even a snippet of one. Toward the end, he simply was not the same Grandpa Bill that I had known as a child. Those more recent memories are perhaps the most vivid, but I try to treasure the older memories as more representative of whom I refer to when I talk about Grandpa Bill.

The funeral was hard, just as it had been for Grandma Deanie (a quick descent following stroke) and just as it would be later for Grandma Etta (Alzheimer’s again). I had to face the reality that I would never see these people again, that all I had left were the memories.

My mom, Bill’s daughter, is an ardent Christian and strongly convinced she will see her dad again in Heaven. Being convinced of that fact doesn’t make everything better for her – she took it all so hard – but it means that she can wait for a time when she’ll be with him again, for eternity, along with all the other relatives who’ve died or will die. I can tell it’s a comforting thought to her, as it is to most everyone who believes in a Heaven.

In the famous song ‘Imagine’, John Lennon asked us to imagine there’s no Heaven – it’s easy if you try, he said. What’s long been more difficulty for me is imagining that there is a Heaven.

How would it work, I wonder? Which Grandpa Bill is in Heaven? The most recent version, with dementia and sadness and confusion? Surely not, if Heaven is the wonderful place it’s supposed to be. So perhaps an earlier instantiation of him? But if a younger Bill is in Heaven, then we’re deprived of the memories and personal development (for better or worse) that happened in all those intervening years. We’re faced with the opposite problem: again it doesn’t feel like the Grandpa Bill I remember from childhood, if he’s just a young man who hasn’t had a fraction of the life experience that older fellow had. 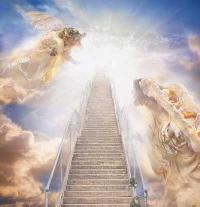 So maybe the Grandpa Bill in Heaven is the one that fits my memory? This doesn’t make a lot of sense, not only because my memories extend through time (and thus different versions of him) and are faulty (as all memories are), but because there are countless other people who remember him in many different ways from many different times. If we’re all to meet up in the same Heaven, then we need to know which Bill will be instantiated there, waiting for all his past relatives and acquaintances.

Frankly, no solution makes sense to me. I can’t imagine a Heaven that makes sense, and that’s because in a broader way, I can’t imagine a fundamentally unitary concept of identity that applies to people. We aren’t a static, well-defined thing that never changes. We are dynamic: we grow, we adapt, we make mistakes and we learn from them. Day after day we are reshaped, by our world, our experiences, our interpretation of those experience, and sometimes by sheer will to change and better ourselves.

There is no Absolute and Eternal “Me”. The kid who went by my name many years ago is fundamentally not the same person as the self that wears that name now; and surely by middle-age, the person going by my name will not entirely, not completely and 100% be identical to me-now.

This is a major issue in the philosophy of identity, called “The Ship of Theseus Problem”. The ancient Athenians tried for many, many years to preserve the famous ship in which Theseus returned from Crete as a sort of historical treasure. Of course, some planks of the ship decayed with time, so the caretakers would carefully replace them with new planks as it became necessary, but certainly over all those years the same ship sat in the waters – replacing one plank did not make it no longer the ship of Theseus.

Of course, eventually every plank of the entire ship had been replaced, and in fact we can imagine that not a single molecule of the original ship was still there. Would we still consider the ship floating in the harbor all those years later to be the same ship, the ship of Theseus? Some people contend ‘yes’, that the specific materials don’t matter, so much as the structure and continuity with the original.

But then, asked Thomas Hobbes much later, what if we’d kept all the old planks that had been replaced and used them to make a second ship? It is now a ship of the same design, made of the exact same parts, all of those parts continuous with the original. Which ship is the ship of Theseus? There’s no simple answer.

The same problem applies to us, not just in terms of personality, but even in terms of the physical makeup of our body. As Richard Feynman said, our brains are last week’s potatoes, made up of the dust of stars long before us, and it appears that something like 98% of our bodies’ atoms are completely replaced each year, on top of the constant structural reorganization. Whatever I am, “I” am a moving target.

I’ve thought about this issue for a long time and I’m not sure there’s a good answer. Maybe I’m just not thinking of it right. Maybe a person, an identity, is not something that can be pinpointed down at a particular moment in time. Maybe a person is more like a 4-dimensional object, a long, extended hyper-body with a child-size form at one end, growing as you follow it to an adult-size form in its middle, and finally an elderly form at its other tail, each ‘slice’ a full 3D person at a particular moment in time.

This may at first seem like a solution to the problem of Heaven. Maybe there’s not a young or an old or a Parkinson’s-ridden Grandpa Bill “up there”, but a 4D hyper-object that encompasses all that is and was Grandpa Bill. It makes for a nice story in the abstract, but it isn’t very comforting to think about in the concrete. Such a Heaven would not be Grandpa and me sitting in the living room watching Yankees games together; and maybe that’s okay.

But then I wonder, if Heaven holds these 4D hyper-objects of people from their entire lives, then do they interact when they get to Heaven? Do they change and adapt and grow? Can they make mistakes? (Surely a creature that makes no mistakes is not identical to the creature that is “me”!) If so, what kind of perfect world is Heaven?

And that’s where the idea really breaks down, in my mind. It just doesn’t make sense. As Greg Graffin put it:

“What pretension, everlasting peace / Everything must cease”
–Bad Religion, ‘Cease’

Part of what makes life interesting and worth living is that it is not static, but ever-changing. And at a fundamental level, change is mutually exclusive with perfection or permanence. If Heaven is, as various religions tell us, perfect and eternal, then it isn’t a place where dynamic things can exist. It isn’t a place where I or you could exist, without it becoming just another place, just another Earth.

We either come to an end because we evolve into something different and the old form ceases to exist, or we come to an end because we become frozen in a static void of Heavenly permanence that is the very opposite of being. In that sense, the traditional conception of Heaven just seems impossible. Maybe we just need to learn to live with the idea of impermanence, and enjoy the moment we’re in, the slice of a hyper-life that we currently occupy and the only perspective from which we see able to experience.

This entry was posted in Uncategorized and tagged freethought, identity, living, religion. Bookmark the permalink.

5 Responses to What Pretension, Everlasting Peace