“So what is this mind of ours: what are these atoms with consciousness? Last week’s potatoes! They now can remember what was going on in my mind a year ago — a mind which has long ago been replaced. To note that the thing I call my individuality is only a pattern or dance, that is what it means when one discovers how long it takes for the atoms of my brain to be replaced by other atoms. The atoms come into my brain, dance a dance, and then go out — there are always new atoms, but always doing the same dance, remembering what the dance was yesterday.”
–Richard Feynman (The Value of Science)

Back in 1953, researchers at the Smithsonian Institution concluded from radio isotope tracings of chemicals entering and leaving the body that we replace around 98% of our bodies’ atoms every year or so.

Most of us are familiar with the cells in our body being replaced (the new daughter cells being made up largely of new food we take in). Skin cells slough off constantly and yet we retain skin. Hair is lopped off and new hair comes out. The stomach lining is replaced in a matter of days, the liver in weeks. An 18% yearly calcium replacement in the adult body replaces most of our bones in a few years. Neurons essentially stay for life (though adult neurogenesis sometimes replaces these).

But even those cells that are not replaced through duplication — even those holdout cells like neurons — have shifting make-up on the level of particles. New atoms flow in to replace old ones.

Now, we need not concern ourselves with whether or not every single atom actually gets replaced, or on what timeframe. We can at least be confident that a very large and significant amount of material in our bodies — even in our brains — was not there previously and won’t be there for very long. As Feynman put it, our bodies and brains are last week’s potatoes. 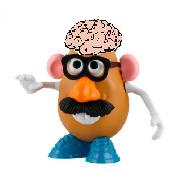 Obviously, this suggests that the individual atoms in our brains aren’t like packets of information holding memories or personality. Rather, the structure is what is important to cognition: whatever materials can instantiate that structure so as to carry out the computations and lead to the proper outputs are sufficient.

It’s reminiscent of how a Turing machine can theoretically be made out of beer cans and toilet paper and still carry out the same work as any old electronic computer. We spend so much time identifying with our body as if it is a constant, but its constituents change all the time, and the only reason we have continuity of identity is because the new parts take their place in an existing structure.

But even the structure changes! Certainly our cells don’t just replace themselves identically — we grow, we develop, we age. My current body certainly looks little like that of the 10-year-old who went by my name years ago. And I’ve no doubt a brain scan today would show something quite different from a scan of my brain thirty years from now. The structure which makes up our memories, our personalities, our identities, it changes. But it changes slow enough that on the day-to-day scale, we don’t really notice.

In some fundamental sense, I am certainly not the same person in the morning as the one who laid down in bed the previous night. But I am so similar that it is absurd to try to organize the world in such a way that I make a consistent distinction between such closely-related things. Imagine if every reference to a friend was instead a reference to a friend-state limited to a particular moment.

It’s clearly a useful illusion to consider our identity constant, but common sense (our vast change physically, mentally and emotionally over time) and science (isotope traces and more recent histology) remind us that deep down, it is indeed an illusion.

This entry was posted in Uncategorized and tagged cognition, identity, philosophy. Bookmark the permalink.