Over enough time, molecules released into the air disperse pretty evenly (this is why polluting smoke-stacks are so tall, avoiding local pollution by dispersing the output more widely). It’s reasonable to assume, then, that whenever you breathe out, eventually those molecules from your breath end up spaced fairly uniformly around the Earth’s atmosphere.

That’s also the case for historical figures (for whom enough time has passed to really disperse their breaths well). So if, for example, Caesar’s last breath is spread around the atmosphere pretty uniformly, then what are the chances you are breathing part of that in right now, in this very breath? 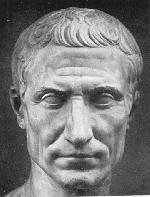 According to common calculations, the chances are really good. Each breath you take, in fact, has a high chance of having some of Caesar’s last breath in it! (And the exhalations of Shakespeare and Hitler and Plato and the first human beings and…). How do we make such a calculation?

Phew. So if our rough numbers are anything close to correct (see below), we’ve shown that every time you breathe in, you’ll generally get one or two molecules that came out on Caesar’s last breath! [Similar results found here and here]. Ditto for the breath of anyone who lived long enough ago.

The same sort of calculations can be done with a cup of water thrown into the ocean long ago — any drink we take is likely to have some atoms out of that earlier cup. It’s counter-intuitive, but there’s just so many atoms in any day-to-day volume we deal with that dispersing those atoms around evenly leaves some everywhere. (Compare to the case where a breath contains only a trillion molecules — any two breaths would be unlikely to share molecules).

But in the above calculations, we used some pretty rough numbers to estimate our parameters, and thus few significant figures in the calculations. So is our conclusion really legitimate?

Unfortunately, the nature of the problem is just too complex to calculate in any exact way. Air density is not uniform, for example, and atmospheric dispersion is complex (which is why we chose the breath of someone who lived long enough ago). But these estimates can at least get us around the order of magnitude of the solution. In other words, even if we’re wrong about averaging 1.7 Caesar-breath molecules each inhalation, we can probably be confident of taking in at least one of those molecules per day.

Still impressive. It just goes to show how inter-connected our lives are. All of us share the same air, even with those humans that came thousands of years ago.

This entry was posted in Uncategorized and tagged environment, interconnection, science. Bookmark the permalink.