Since Einstein’s work on relativity, we have come to think of our universe not simply as involving three spatial dimensions and one time dimension, but rather as a four-dimensional entirety, labeled space-time. Roughly speaking, instead of thinking there are different versions of an object (my car in the past, my car in the present, my car in the future), we say there exists simply a 4D hyper-object that encompasses all those states of the car at what we think of as all different times, and our experiences with an object are really experiences with particular ‘slices’ of that hyper-object.

Thinking in terms of more than the familiar three spatial dimensions can be challenging. In the late 1800’s, Edwin Abbott used his novel Flatland to show us how a 2-dimensional being could eventually come to recognize its world as being contained within a higher-up 3D world, and to suggest we three-dimensionites might have similar trouble recognizing higher dimensions that contain our own.

Of course, mathematicians have long dealt with non-Euclidean geometries, including those of higher dimension, and cosmologists today continue to debate the possibility of even more dimensions actually existing. For example, some string theorists are now investigating M-theory, which posits 11 dimensions of space-time, and may involve multidimensional objects called ‘branes’. In this theory, our universe would be considered a 4-brane (with its three spatial dimensions and one time dimension), but there could be other branes of different dimension. 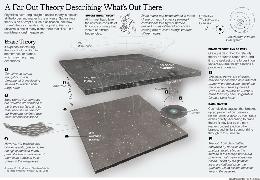 Building off of this (still-nascent and controversial) field, John Smythies over at The Psychological Channel presents what a “new paradigm” of consciousness he calls extended materialism.

Basically, it seems like our mental workings (ideas, thoughts, perceptions) have spatial extension, yet it is unclear how they could simply be identical with things in the normal 4D physical world: when I perceive redness, the neurons in my brain need not actually be red. Something about the phenomenological experience differs from the brute physical events in the brain (even if the neural activity is correlated with the subjective, conscious mental events), so eliminative materialism doesn’t seem to work.

In its place, Smythies proposes extended materialism. He explains it in pretty fuzzy terms in the article, but it goes something like this: the physical world brane exists, and then another spatially-extended brane exists which is populated with conscious experiences, perceptions, ideas, and so on — basically, mind. So mind exists in a separate plane — I’m sorry, brane — than physical matter like our brains and bodies. But, crucially, these two branes — physical and mental — interact in some (unspecified, but causal) way. There is an isomorphism or congruence such that through this intersection between branes, the physical influences the mental, and vice versa.

It sounds like an okay conceptual speculation, though I’m not sure it gets us anything very new. The terminology is updated, but is it that different from traditional dualism that puts the mind in some other ‘realm’ (though traditionally that realm has been seen as without spatial extension), and suggests an interaction between the physical and mental realms (be it Descartes’ pineal gland or something else)?

Smythies’ account was initially engaging, though I admit I’m unqualified to judge his explanation or application of brane theory (which itself is far from yet being accepted as applying to our reality). For most of the article, I was willing to just go with the speculation and let the details remain vague, but toward the end Smythies panders to the absurd:

“A third advantage of the new paradigm. emphasized by Carr (2008) is that it can account quite simply for the facts of parapsychology. All we have to suppose is that the psi forces have their normal focus on the brain but also have a ‘penumbra’ that can extract information from other objects and other minds. This can account for the transfer of information that take place during telepathy, clairvoyance, and psychokinesis (see Carr 2008) for details).
[…]
“A fourth advantage is that it enables us to look at the possible nature of after-death experiences in a rational manner. […] In this view the physical world becomes a communication device between individual consciousness modules located in different branes. Therefore, on the death of the physical body, most of the consciousness module would become redundant, as there would now be no brain for it to interact with. However, the Self could remain, and perhaps the sensations, that used to be organized by the brain via the visual and other sensory fields, could rearrange themselves, or be reorganized by something else, into new forms of experience.”

Seriously? Sure, it *could* potentially account for phenomena like “psi forces” and consciousness after death (though nothing in brane theory predicts these, specifically, nor explains how this would work), but that assumes these things even exist in the first place!

I’m sure lots of interesting speculation can come out of brane theory (though I’m not sure Smythies has any better grasp of it than I, in my mathematical ignorance, do). But it makes no sense to argue for brane-based dualism on the basis of its alleged ‘advantages’ over the old paradigm, when those advantages are things like explaining hypothetical phenomena that don’t even directly follow out of the new paradigm unless they’re first assumed.

Sorry Smythies, but you lost me as ‘psi forces’.

This entry was posted in Uncategorized and tagged consciousness, skepticism. Bookmark the permalink.

1 Response to Consciousness and Branes