Do Primates Have Self-Control?

Despite our many lapses, humans still manage to show remarkable self-control. We pass up a tempting slice of cake in order to eat a healthier alternative. We avoid buying a shiny new car today so that in a year we can put a down payment on a house. We save for retirement. Sure, we may not be perfect at avoiding temptation in the present, but when you think about it, the amount of self-control we do show is rather impressive.

Some people are better than others, of course. In the 1960s, Walter Mischel tested young children by giving them a marshmellow. They could eat it immediately if they wanted, but if they waited 15 minutes, they got a second marshmellow. Some kids succeeded in waiting, some didn’t; and it turns out the ability to wait was linked to success later in life. 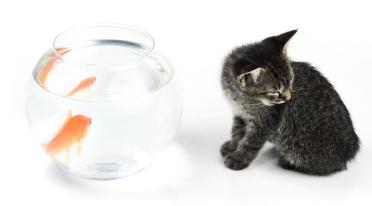 Self-control is a valuable skill, but is it unique to humans? We can look at our close evolutionary ancestors, the non-human primates, for a hint.

Researcher Michael Beran presented chimpanzees and orangutans with a task similar to the marshmellow task. Each ape subject had a bowl in front of it, and the experimenter slowly added up to 20 chocolate candy pieces to the bowl one at a time, up until the subject took the bowl. So the longer the ape waited, the more chocolate it would get — but chocolate candy is a tempting treat to a chimp or orangutan. Beran showed that they can wait until all the candy is in the bowl before taking it. So it’s not just humans that can show a little self-control in order to maximize their payoff. (In fact, researchers have shown similar results in other animals, like pigeons and rats).

Likewise, Ted Evans and Greg Westergaard gave capuchin monkeys a pretzel or celery stick which they could either eat immediately, or carry over to a far-off box to probe inside for more-preferred food (peanut butter). Many of the monkeys were able to pass up eating the food in their hands in order to save it and use it as a tool elsewhere to get better food.

However, human self-control is not just a matter of waiting a couple minutes to get more marshmellows or M&Ms, or to get a better food item very soon after. We also manage to pass up temptation here and now in order to get payoff much further into the future. We anticipate future needs and motivations that are not present right now (like future hunger), and adjust our behavior accordingly. For example, we save part of our paycheck for rent (or even retirement) instead of spending it all immediately. We show planful self-control. Do primates other than humans manage that feat?

For a long time, the answer seemed to be ‘no’. Primates in captivity will often throw extra food out of their cage once they are done eating, even though they will undoubtedly be hungry later that day or early the next. Like many animals, primates tend to show temporal myopia, a tendency to overvalue immediate circumstances and undervalue or not account for the future.

However, in 2004 researchers clearly demonstrated planful self-control in monkeys (McKenzie et al. 2004). At feeding time, captive squirrel monkeys were offered a choice between a big pile of food and a pile of food half that size, and not surprisingly they preferred the larger pile, even if the smaller one was enough to fill them up immediately. After choosing the large pile, they often took hours to consume all the food, going back to eating after long delays away from the food. But this doesn’t prove they were planning for the future — maybe they were just following a very simple rule to always go for the larger food choice, all else being equal.

So the experimenters did something sneaky. Fifteen minutes after the monkeys chose a food pile, the experimenters started stealing or replinishing the food, such that in the long run the smaller pile actually paid off with more total food. If they kept selecting the larger pile, most of the extra food they didn’t immediately consume would be pilfered. If they started selecting the small pile, however, they would end up getting more food in the long run (when they were hungry again later). Sure enough, the monkeys began inhibiting their natural preference for the large pile (even though it would still completely satiate their current hunger) and chose the small one. They seemed to be passing up extra food now in anticipation of future consequences later. Primates do show planful self-control.

Even cooler than that, however, is a more recent study by Nicholas Mulcahy and Josep Call. They let apes (orangutans and bonobos) figure out how to solve various problems using different tools; a given problem required using a particular tool, whereas the other tools wouldn’t work. Then for the experiment the apes were allowed to see which problem they would later be presented with, after which they were taken to a room with all the tools laid out. Their task was to pick the correct tool, with no immediate feedback, and if they so chose, to carry it with them. Then up to fourteen hours later, they were allowed back into the room with the problem, and if they had chosen the right tool and kept it with them, they were able to solve the problem and get their food reward.

Sure enough, the apes were able to plan that far in advance, remembering which problem they had seen and anticipating the future need for a particular tool even when the problem in question was out of sight, and alternate tools (which had been just as good at solving other problems previously) were available. It may not seem like self-control per se, but note the behavioral cost that is involved in lugging around a tool all day just so that you can use it the next morning when you’re going to be hungry (even if you’re not hungry and can’t use the tool right now). 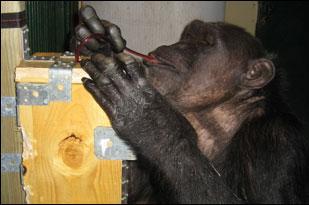 So it appears that humans are not the only primates that can show self-control, even in planning for the future. A more interesting question now might be: why are some individuals (human or not) better at self-control than others, and to what extent is it a skill that can be learned and improved with practice?

In Evans and Westergaard’s study, the monkeys that were best at saving the pretzel or celery stick for later use in dipping for peanut butter also tended to be those monkeys with the most tool-using experience. Maybe it is the case that monkeys with self-control (or some other trait related to self-control) were more likely to catch on in tool-using tasks, or maybe practice in tool-using actually led to increased self-control later. Hopefully future experiments will tell.

This entry was posted in Uncategorized and tagged behavior, planning, primates. Bookmark the permalink.

3 Responses to Do Primates Have Self-Control?