The Catholic Church just announced an effort to train hundreds of priests to become exorcists. Apparently, right now “you have to hunt high and low for a proper, trained exorcist,” according to the Vatican’s Exorcist in Chief, Father Gabriele Amorth. You know, a proper, trained exorcist, as opposed to some schmuck merely reciting prayers to an archangel (the poor man’s exorcism, according to the Vatican). It’s just more magically powerful if a proper priest does it. 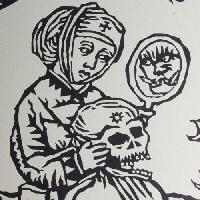 In case you forgot, Father Amorth is the guy who warned against the Harry Potter books because they try to distinguish between good and bad [fictional] magic, whereas he says any magic is a move toward the devil. Any magic, that is, except his own. Magic power words (prayers), magic water, and hand-waving magic gestures used to banish demons during an exorcism — those are okay, because they are done by trained professional magicians (priests).

By the end of 2005, Catholics numbered over 1.1 billion, about one-sixth of the entire world population. We are not talking about a small religious group, but one of the biggest out there. And their official body, representing their god and religion, is still back in the Dark Ages worrying about boogiemen possessing people. Why?

Is it because fear keeps people in the flock, and takes their mind off scandals like wide-spread child rape by church leaders?

If so, it’s a double-edged sword, because such fear makes people irrational, and when you feed into their irrational impulses with talk of magic and demons and other superstitions, you fuel a fire of stupidity that leads to deaths (note some exorcism-related deaths thanks to Wikipedia) and more scandals.

Of course, this sort of thing is not confined to Catholics. Many Muslims believe in possession by jinn (genies, invisible spirits made of smokeless fire). Scientologists work to exorcise possession by Body Thetans. But it’s especially popular among Evangelical Christians (a “big business”, estimated at around 500 such ministries in 2006).

A couple years back, I had a friend in the army. He told me stories about how himself and his Evangelical comrades in the barracks were involved not just in a war against another country, but in a real war against evil demons. This was apparently common belief among a large proportion of the barracks personnel, who claimed to experience the literal presence of demons involved in such shenanigans as opening and closing doors at night and moving objects around. No doubt more nefarious things would have occured were it not for the “strength in Christ” shared by these army guys. The same friend also told me once of an exorcism “successfully performed” on a member of his church, right down the street from where I lived at the time. The practice is not just for the rare group of nutcases; it’s surprisingly common (often hidden under the less conspicuous label “deliverance ministries” by Evangelicals).

The sad thing is that many of the victims of exorcism (note: victims of the practice itself, not victims of possession) have historically been people with some sort of real disorder (schizophrenia, epilepsy, Tourette’s, depression). Unfortunately, this faux treatment can keep them from getting real help (when it doesn’t directly threaten their lives, that is).

Maybe some people just need magic. The world is big and complex and scary, and believing in magic is an easy way to simplify everything. But it’s too bad that such a belief in magic can hurt innocent victims too.

This entry was posted in Uncategorized and tagged freethought, religion, skepticism. Bookmark the permalink.