In- and Out-of-Body Experience

Normally our bodies receive sensory input through eyes, ears, skin and other systems, and those inputs synch up in consistent ways, such that our brain can put it together into a coherent picture of the 3D world around and including us. My visual input is basically just a sterooscopic movie, but because it matches so well with tactile and other input (you feel the toe-pain of a rock right when you see that familiar foot object hit it), we interpret those images as us being inside a 3D world. Really we construct the world around us — and we presume our construction is veridical because it consistently predicts the matching up of sensory events (occasional illusions notwithstanding). 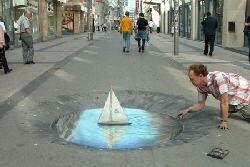 This makes perfect sense if, as we assume, we are bodies inhabiting a 3D world — bodies including brain systems that integrate sensory input from different feedback devices (including inner feedback from proprioception and the like). But if this is the case, then we should theoretically be able to disrupt or alter the brain processes that synch up our various sensory experiences, such that our consistent, 3D view of the world from our own body’s perspective is thrown out of whack. But what would happen, in that case?

We’re all familiar with claims of out-of-body experience such as, say, looking down on your own body from above. That is to say, some people report visual input that seems to locate itself in a spatial location within the 3D world that is not the same as usual. In fact, they may see an image of their own body, much like what we see in a mirror; except in the case of a mirror the various sensory modalities still match up. When seeing yourself in a mirror, the proprioceptive and muscular feedback of lifting your arms corresponds to visual feedback of the arms moving up in the mirror image, as well as peripherally seeing the arms come up as normal. In an out-of-body experience, however, the body could move (or not) in a way that doesn’t correspond to the changes in sensory (usually visual) input to the experiencer.

One way to explain this might involve imagining that our self or mind, our perspective as a subjective experiencer, is not actually tied to the body in a strict way, and that we as an experiencing being can separate from the body and move about through space in some other way. Of course, aside from the major problems inherent to mind-body dualism in general, this also leaves us unable to explain how something lacking eyes and a brain could receive and process visual input from light waves.

However, there is a more plausible explanation for the reports of out-of-body experiences and autoscopy (perceiving one’s body as if from outside it). Maybe it happens because the normal brain processes that link up our multi-sensory input get messed up and the brain is just doing its best to represent the world however it can.

This is a rough description of how scientists studying the phenomenon have come to understand it. Olaf Blanke and others have found evidence that implicated the brain’s temporo-parietal junction in piecing together our multi-sensory experience. Basically, they suspect this area is crucial for the sense of self located in space, and disrupting it can lead to out-of-body experiences.

Meanwhile, scientists have come up with a completely different approach at studying the phenomenon. H. Ehrsson and colleagues managed to induce out-of-body, autoscopic experience in perfectly healthy participants. They hooked people up to a virtual reality head display which showed real-time video coming from two cameras located a little behind their body and aimed at it. In other words, they saw a real-time movie of their own body taken from right behind it. 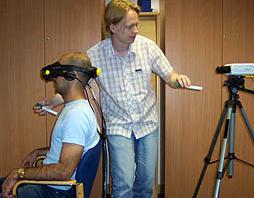 Then the experimenters stroked the participant’s chest with a stick while at the same time stroking the air near the video cameras where a body’s chest would be if the video cameras were eyes. Doing this led to out-of-body experiences, reports of participants feeling as if they were behind their physical bodies and looking at the bodies from that location. But this only happened if both sticks were stroking synchronously; if not, then the out-of-body experience was not produced.

Furthermore, a followup by Olaf Blanke and company replicated this but then afterward blindfolder participants and passively moved them to another part of the room. Next, they asked participants to return to their original location. Intriguingly, those who had experienced the synchronous out-of-body condition moved to the wrong part of the room (closer to where the video cameras had been, rather than where their actual body had been). On top of their verbal reports, this provided further evidence that they had truly experienced themselves as being located where the virtual body was (that is, where the cameras were providing visual input from). People in the asynchronous condition did not experience this. [More details here]

These experiments show that it doesn’t take brain damage or near-death to induce out-of-body experience. Simply altering sensory input (specifically, how information from multiple senses comes in together) can alter our perception of self and body in space.

This is really cool stuff for two reasons: (1) it helps debunk supernatural/paranormal explanations for out-of-body experiences by showing how the illusion can be produced in a completely natural way, and (2) it helps us better understand how our brains produce conscious, subjective (from a particular perspective) experience.

This entry was posted in Uncategorized and tagged cognition, consciousness, identity, skepticism. Bookmark the permalink.