Is It Irrational to Play the Lottery?

Short answer: yes, it is irrational. Odds of winning big are less than the ratio of ticket cost to amount won. If $1 has a 1 in 1-billion chance of netting you 500 million dollars, it’s a really bad deal. Why?

Let’s say you could play the lottery over and over and over again an unlimited number of times. After a trillion plays, on average you’d win about 1000 times (roughly once every billion draws). That’s 1000 x $500 million = $500 billion won, but you’ve spent a trillion ($1000 billion) to play. So you’ve wasted a lot of money in the long run. Even if the chances of winning are closer to the cost and win amount ratio, if the odds are lower than the cost and win amount ratio, then it’s generally a bad deal.

So traditional economics says not to play the lottery.

It’s hard to argue with the simple probability of such a straightforward game, but unspoken behind the conclusion to not play lottery are a number of assumptions to which those probabilities are applied.

First assumption: that people are maximizers when it comes to their money. In other words, we make decisions that have the highest chance of getting the most money. This is often a pretty safe one, but it’s an unspoken assumption nonetheless when asking whether or not to play the lottery. Also, it’s not hard to imagine circumstances in which the assumption is violated. Let’s say someone offers you a very simple coin-flipping game with a fair coin: you risk your $20,000 life savings, the other person risks $25,000, and if the coin comes up heads you get their money, tails they get your money.

You won’t see this game in a casino because the one offering it is getting a shitty deal — playing over and over again the challenger will make lots of money in the long run (about $2500 per coin toss). But it’s easy to see why *you* would not want to play this game: there’s a 50% chance you lose and are out of your life savings. Even though the odds are in your favor, it’s a bad choice to play. The straight-up odds don’t take into account the true level of loss of that $20,000, which to Bill Gates would be less important (making the bet a good one).

Lesson 1: Odds deal with long-term probabilities given a large number of repeated chances. A one-shot deal is always different. And in the case of the coin-flipping game, even if you could play it over and over and over again, you have to have the bankroll to handle that first loss (or a run of losses, as may happen early on). Thankfully, the lottery is easy to bankroll, as easy play is cheap and a few losses in a row won’t break you, *but* if you tried playing over and over again enough times to win, there’s a good chance you would go broke before you won (and if you won, there’s a good chance it would be less than you’ve spent up until that point). Which is why using all your money to buy up half of the tickets for a lottery (giving yourself a 50% chance of winning less than double what you put in) is not a good deal.

Second assumption: people play the lottery mainly to make money (or maximize their chance of making money). Traditional economics focuses, not surprisingly, on the quantifiable monetary aspects of games like this. But certain unquantifiable variables may be at play in your decision whether or not to play the lottery. You may get a rush during the drawing event, or feel a little excitement during the hours or days before the drawing while you hold the ticket not knowing 100% for sure that it’s a loser. The dream of winning may provide you enjoyment or drive or cheer, even if that fades when you lose the drawing (until you go back to buy another ticket). You may feel (disproportionately) good that a tiny proportion of your dollar is going to help schools in your state. Together, all those things may be pretty significant positive gains for the meager price of $1.

(Of course, over time repeatedly buying tickets may add up to a significant cost, and it’s possible the up-and-down rush of excitement, combined with the relief from disappointment that comes from buying another ticket, may act as strong reinforcers for playing again and again — leading to a sort of automated playing like a rat in a Skinner box. But it’s not easy to show clearly that such behavior, even if automatic, is a bad thing, if it still has those positive features like mood boosting or excitement).

Lesson 2: Odds deal well with the easily quantifiable aspects of a situation, but not as well with variables that are less easily quantified and compared, like emotional ones. Applying probability only helps with one aspect of a decision, but the probability must be placed within the appropriate context, and other factors taken into account. So for the lottery player, it may not just be a matter or winning or losing, but an enjoyment of playing the game. Further, the decision to play might be influenced by conditioning. Probability is only part of the equation.

So is it irrational to play the lottery? Not necessarily, even if the odds suck. In some contexts, for some people, it may be rational to play, and for others irrational, and for many it is likely a grey area — because it is hard to quantify and compare values like enjoyment of playing with the chances of winning or losing.

At the very least, if gamblers recognize this, it may help them adopt a more reasonable perspective on gambling. Rather than seeing it as an opportunity to win money, they may start to see it as one other way to get some excitement for a cost. In this paradigm, a blackjack player placing a bet says to herself “I am paying $3 for the 20 second rush I get watching the cards come up, and possibly getting some exciting reinforcement temporarily when I win (even if I lose it the next bet).” In the less common situations where the player ends up on top, it’s a bonus, but it was not expected nor was it the goal. When you lose, it’s the same as coming out of a movie you paid for: sure, you’re out some money, but you had fun, so whether or not you gamble again depends on if the fun you had was worth the money you paid.

Contrast to the player who says to himself “I am risking $3 for a 46% chance to win $3, but I feel good about this one and I’m fuzzy about the actual probabilities, so I probably have more like a 55% chance to win.” In this case, the only way a player can be happy with the experience is if they beat the odds — in those less common cases where they get lucky — but when they lose (which is most likely to happen), they feel bad and may want to keep playing until they can get the one outcome they’re happy with: ending ahead. However, probability tells us that the more you play a rigged game like those at a casino, the further you get from ending ahead; so the player ends up losing more and more money and the fun of playing is replaced with the desperation of needing to make up losses. 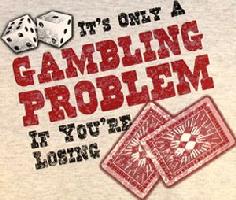 If you’re going to play a game that’s not in your favor, or one where the long-run odds are in your favor but inaccessible (you can only play once, you can’t afford the cost of a run of losses, etc.), then you should look at it as another form of entertainment, and ask whether the fun is worth the potentially very high cost, compared to other activities where you could have as much fun and excitement at a much lower cost. Admission to a theme park may bring as much exhileration as playing in a casino for the same amount of time (and without the mood punishment of each lost bet), and it may cost a lot less. But playing the lottery once a month may be worth the meager cost of the activity if it prompts you to have pleasant daydreams about where you would vacation if you won (rather than playing for the chance to win).

By changing our cognitions about a behavior, we can change the motivations involved, which may in turn help us adopt a more reasonable and safer behavior pattern.

This entry was posted in Uncategorized and tagged behavior, statistics. Bookmark the permalink.

4 Responses to Is It Irrational to Play the Lottery?